Cosmo is still lame, but he is on the mend, he seemed to have had something in his pad, which after poultucing has soften it and brought it to a head and has now burst, all the pus has come away (not very nice, but he is much better now the pressure has eased).

So we are now keeping it open to drain and syringing it out with hibiscrub to clean it out and then spraying it with antibiotic spray.

Hopefully the worst is over and he will soon be back out in the main boys paddock reinstating his top place.
Posted by Cotswold Vale Alpacas at 18:28 1 comment:

Not sure how or what he has done, but poor Cosmo is lame!! He has a small split on his the side of his pad, its doesnt appear to be hot or infected but is obviously a bit sore to walk on.

We have checked his paddock for any where he may have caught it, but nothing is obvious!!

So its was a bit of home first aid, a nice foot wash to clean it, but it does look like his pad has cracked?? not sure if its becaause the ground is so dry?? his pad does feel very dry, poor boy. He now has a lovely blue foot from the antiseptic stray!!

But he is not too impressed about being restricted to the small paddock by the barn but it is for his own good, thats what I keep telling him (dont think he believes me, especially when the girls go to visit the boys up the in the top paddocks and he is left behind!!)

Hopefully it will only be for a couple of days, until the pad starts to heal and he is not hobbling around.

(Any experience of this or recommendations on this will be more than welcome?)
Posted by Cotswold Vale Alpacas at 07:28 No comments:

First the mums give me problems both wanting the same baby!! Now the babies are both feeding from one mum!! and she just happily stood there, I didnt think alpacas would let other babies feed from them?? but now Ive seen it all.

They amaze me, see something new everyday.
Posted by Cotswold Vale Alpacas at 19:02 No comments: 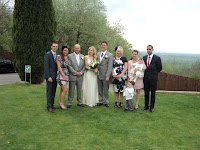 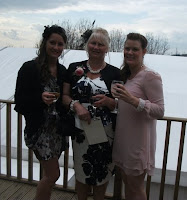 What a busy few days!! But in a very nice way. Firstly my son got married to his beautiful fiance Hannah, we had a fantastic couple of days, staying at the hotel the night before, we all got ready together, loved the help from my two girls. And spending time with my two gorgeous grandchildren. 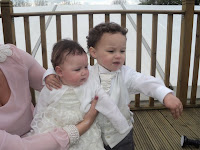 After being away for a few days, its alway good to get back home and check on all the animals, although we knew they were in good hands.

So sunday was a catch up day and a visit from a lovely couple who are very interested in having some pet boys, for their new home, they are in the process of buying a new property and on top of the agenda was - "is it going to suitable for the alpacas?" so after coming to meet all the boys and girls, we headed off to check it out, and I am pleased to say with a bit of hedge and tree pruning and some fencing I'm sure the boys will be extremely happy there. So fingers crossed for them that the sale and move goes through easily and quickly, as they are very keen on getting their new members of the family.

Well after a very busy few days, its down to earth with a bit of a bump. But now to look forward to births and the christening of my gorgeous grandaughter Ava Louise.

Ginnie
Posted by Cotswold Vale Alpacas at 07:51 No comments:

We spent yesterday morning checking out last years cria, as sadly its time for us to decide who we will need to put up for sale.

Having used Snowmass studs on the Huacaya girls, we are rather pleased with the results.

Here we have Cotswold Vale Nemasis, he the biggest out of the bunch and stands out from the rest, we are extremely pleased with him. 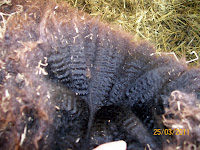 To us he stands out from the rest, but as we are still fairly new to breeding alpacas we are not quite sure, I suppose only time will tell?

I love all the weanlings, but the other one that has captured my heart is our little Maisey Day, she is our little Suri girl sired by our suri stud male "Cambridge Efron" who came to us from Moonsbrook Alpacas and whose sire is the stunning "Accoyo Bulleyman".

She is so funny, suri's can be very funny, getting up to things the others wouldnt dream of and getting into places no one else thought off!! Maisey is very cheeky and is the one that comes right up to you in the field looking at you right up to your face under her swinging fringe. She is a miniture of her dad, and her fleece is already showing a lovely locke which is already swinging as she walks. 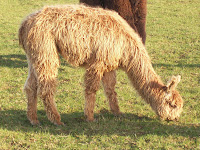 Sadly I dont think the photos do Maisey Day justice, but I do love her.

The Time has come!!

Now in our third year of breeding we have to sell some of our lovely Alpacas, so sad I know, but needs must!! Although we have already sold some adult boys and weanling's, we had not got too attached to them and knew they would not be with us too long.

In order to get our full planning we need to prove the third planning policy rule - viability, that means making a living from these gorgeous animals.

For our temporary planning we had proved our intention for make this a working smallholding, we had purchased our land and invested in our foundation herd, and in our business plan/agricultural appraisal had put down a sound reason to be on site for the well being of our herd.

And I can truthfully say this need has been proved quite a few times in the last two years, and I truly believe if we had not been on site we would have definitely lost several of our precious alpacas.

So now to the task of promoting the sale of girls and boys!!
Posted by Cotswold Vale Alpacas at 09:06 No comments:

What a beautiful day today, sunny and warm :) We needed to move some of the alpacas paddocks around, so thought it was a perfect time to bring them all in and do some body scores and spit offs to check who had held the pregnancy through the winter.

Out of 11 all but one definitely spat off!! Some more than others, poor old Cosmo!!

Sadly Cosmo was not going to get the chance to mate the one girly who appeared to have lost her baby during the winter, so wasnt too impressed when he was put back out into his paddock!

We then needed to mate one of the girls who had given birth a couple of weeks ago, it was now Efrons turn to do the business, and without much trouble at all, Cleo dropped down to the floor and off we went, only problem being in their 2nd year of fleece it was very difficult to part the fleece out the way and make sure this were in the right place!! if you know what I mean, but being as professional as Efron is there was no problem, so we left them to get on with it.

Toya who had lost during the winter was then introduced to Ewen, again she went straight down, so that obviously proved she wasnt pregant as normally she's a real spitter and a kicker. Much easier this time to see things were in the right place, so again left them in peace to get on with it.

Then it was the job of getting them all back in the correct paddocks, but that wasnt too difficult with the offer of fresh grass on offer.

So they are all now happily grazing and sunbathing. :)
Posted by Cotswold Vale Alpacas at 13:00 No comments:

Well here are some pictures of my latested achievement, Never been a knitter before, but have surprised myself and my family!!

First is my gorgeous big teddy, made from wool I spun myself from our home bred girl, Dayna.

Then there is my knitted then felted handbag, this has been made from hand spun suri fleece, donated by two of our home bred Suri girls, Bonnie & Cleo. 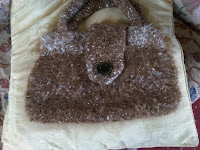 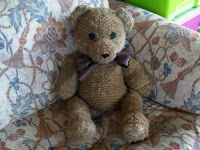