What a Difference Today!!

What a difference today is from yesterday, horrendous wind and rain!!  But today the mild weather is back with us its really mild and the sun is shinning, a huge difference from yesterday!  The grass is still growing (although we don't have loads) you can tell its still coming as the Alpacas are eating less of the hay.

I have just moved them all around this morning to give them some more grass, they do love changing fields, and that will be the last of I see of them down in the main field until tea-time, can still see them but in the distance.

Coming to Hay!!  hopefully with this prolonged fairly mild weather we won't be using as much, boy oh boy is it expensive!!  I am paying double what I was 2/3 years ago!!  And I am not sure if its my imagination but I think my small bales have shrunk!!!  is it possible to change the size of bales you make!! ??

I know probably quite a dumb question.  But I think its like everything these days somewhere along the line manufacturers manage to shrink the product and still make people think they are a getting a bargain (but in fact they are getting less for their money!!)

Example: Tin of Roses - I have an empty tin from last year (keeping doggy treats in) and the weight is 975g and I am sure I paid £5 for it.  This year the tin holds 850g for £5 - so same price but less for your money!! (sorry I know Roses are a luxury item but its the only thing I have available to compare and prove my thinking)

And now to mobile phone bills!  I thought if you signed up for a contract you were safe in the knowledge that the only additional charges would be if you overspend your minutes/text or phone chargeable numbers so that's down to you being careful.  But on no we just got a text from Orange saying they are putting up our contract charge!! even though we still have a year to run on the contract.  And you can't get out of it (its in the small print - and yes like everyone I didn't see that in the small print!!)

But back on a lighter note - our BG's lol still being naughty and still making me laugh :-) 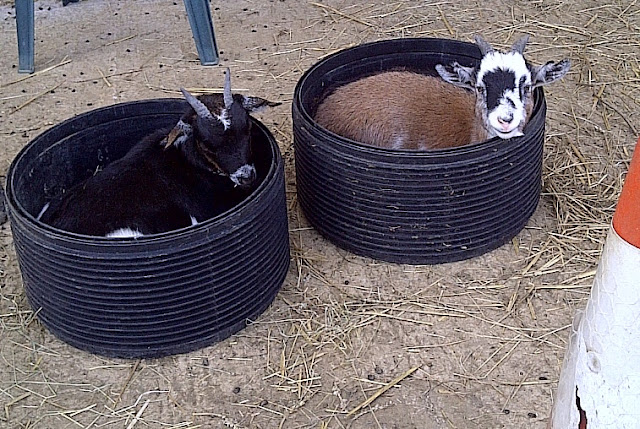 Up to their old tricks "Oh dear!! caught on the roof again!!" 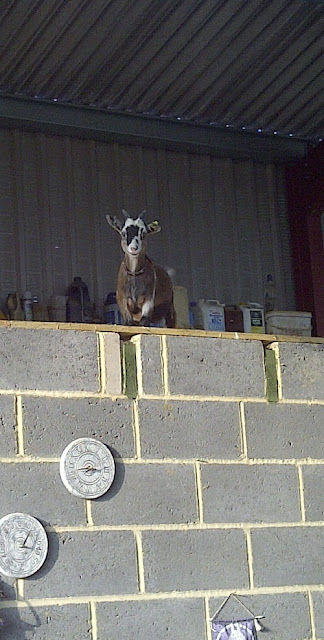 "Quick get down the stairs, mum is coming!" - too late she's got us on camera! 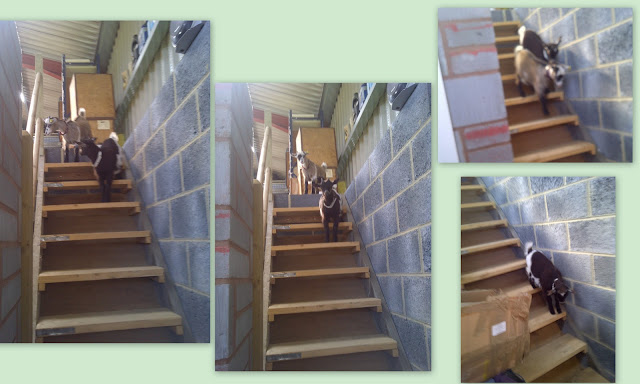 Naughty BG's still up to their naughty tricks and still making me laugh :-)
Posted by Cotswold Vale Alpacas at 10:18 3 comments:

A question?  Do you give AD & E to all alpacas? (Adult, weanlings & Cria)  or is just the Cria who should have it?

I have been doing all of mine, but someone told me they only do their cria.

So what do I do?  The bottle from the vet only gives me the amount for cria.  Last year we used paste, but got to the end of December and sadly had a little female cria go down with rickets, even though I had been giving them the paste monthly since the end of September!   So on the advice of the vet changed to injections.

So any info on who I give it to mostly gratefully recieved.

Revamping out Website with a "Gifts for Sales" Page!

I decided to have a computer day and I really don't know where today has gone!!  It was about time to up-date our website and add some items for sale.  I can't believe how long it is taking!!  Still have quite a bit to do.

But here is a peek preview.

I can't believe how mild the weather is, this time last year we were covered in loads of snow!! 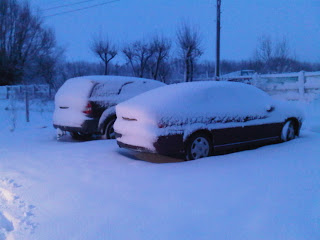 November 2010
What a difference this year is!! 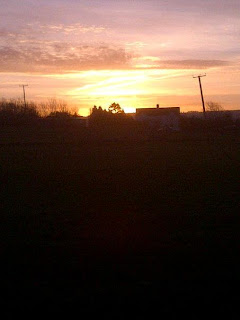 November 2011 - I know its a bit dark, but it was first thing this morning when the sun was beginning to rise, it hasn't stayed out all day but it was beautiful to see.
And I just have to put this picture on the blog, it was so funny. 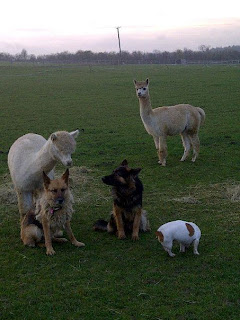 This is two of our stud males, while I was feeding the horses the dogs were happily sat waiting for me when I turned around I caught Ewen chancing his luck and trying to mount Angel !!  poor boy must be desperate and Angel wasn't too impressed either!
All the girls are now grazing down by the barn so I can see them through the window, and OMG I have just spotted a naughty weanling feeding from her mum!!  Naughty, naughty girl, she has only been back in with mum for a few weeks and this is the first time I have seen this, I did think she was getting quite big!  So don't know how long she has been doing it!!

This is mum's first cria so obviously don't know any better, mum is (or we hope she is still) pregnant and due to give birth early April, her condition seems ok, but what am I going to do?  I don't have any other cria ready to be weaned, I can't put out with the other weanling because he is now out with yearlings (and I certainly can't put her out with them)  oh what am I going to do?

Always something to worry about!
Posted by Cotswold Vale Alpacas at 14:46 2 comments:

All is well with our animal family, everyone seems to be enjoying the mild weather, who would believe this time last year the snow was on its way (ooh hope I am not tempting fate there!! lovely as snow is, it does make life a lot harder both on the farm and out on the building site where Tony's works)

So to my blog title, I really need some sales advice,  in my past life I was office bound, a financial / office manager.  A wiz with a computer, and a fountain of knowledge and experience with word, excel, access etc and a head for figures.  BUT SALES IS QUITE ALIEN TO ME!!

We made a huge change in our life's direction to follow our dream, sold our lovely comfy house and invested everything into Cotswold Vale Alpacas.  Its been a bit of a roller coaster, not more so due to the recession, but wouldn't change our decision for anything, we didn't want to be one of those couples who said later on in life !If Only We Had!!!!!"  with hind sight we may have changed some of the way we have done things but not   the decision to breed Alpacas.

Tony's has carried on with his day job which has helped keep our heads above water, last year I was made redundant from my part-time job, which pushed me into working full-time with the Alpacas (which I love)

Having never run a smallholding I have learned loads, am very confident in caring for the Alpacas, proud of our healthy cria from this year and even more prouder of learning to spin & knit (getting better & better at both as time goes by) especially as I have always been a brain person not a hands on person!

Now for the help - Sales advice needed.  How to advertise & sell some girls, how to market them & where?  how do I decide who to sell!!  I have never been a sales person and feel way out of my depth with this (I knew it was coming, but time has flown and it seems to have come around so quick!)

We have sold boys, (I really don't want to part with them!!) but I need to sell girls!  Any help and advice would be gratefully received.

Many thanks
Posted by Cotswold Vale Alpacas at 07:25 1 comment:

Where has the time gone!!

It's been a long time since I have blogged!!  2 months!! where has the time gone?

All the animals (Alpacas, Dogs, Cats, Horses and Goats) are doing well, but I have lost count of how many animal mouths we are now feeding!  But we love them all.

We did have a bit of a worry with Ronnie a couple of weeks ago, Ronnie is our little beige pygmy goat, she became very quite and didn't want to come out of the stable, which is certainly not normal!  Normally the minute they hear the patio door open they both start calling to be let out, but it was funny they were both very quiet, they normally run out of the stable to get their breakfast.  But Roxy came running out but Ronnie was sat in her bed (an old plastic dog basket with straw in, which they both love to sleep in).  I went in and she got up but appeared to be a bit lame, I couldn't feel anything wrong, her leg wasn't swollen, there was no heat and she wasn't too worried when I moved it, so I put it down to a strain (which I am not surprised at,as they are both forever jumping in and out of the feed which are hanging on the hurdles (just to make sure we don't have any unwanted creatures getting into them) and I have even found them up in the hay racks!!

But thankfully within a couple of days she was walking a lot better, although she was still quite quiet, but now I can report that she is definitively back on form as you will see from the photo below.

Here they both are on top of the dogs kennel waiting for their tea, as you can see they have been very naughty by stripping the felt off the roof and pooing on it!  Just can't keep them from jumping onto everything, I think they have springs on their legs!. 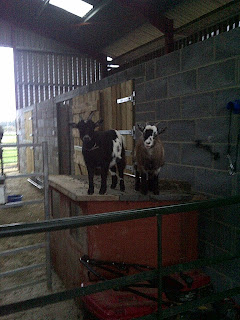 They are so, so funny and we love them to bits, during the day they have the full run of the barn, yard and field, if you go out they called to you, if you are in the barn they follow you around and if you ignore them they will pull at your trouser and push your legs, they love to be tickled and scratched, and even wag their little tails.  They do so many things which make us laugh. 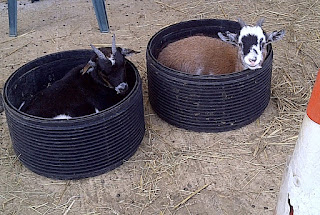 Here they are in what should be their tunnel, which they took apart!!  But how can this not put a smile on your face?

The Alpacas and Goats get on well now, and just mingle in together, sharing food and hay.  So here is a photo the girls waiting for their tea, its amazing they can all be at the top of the field when I go out to do the feeds, the goats hear the patio door open so start calling, the alpacas hear the goats calling and immediately come charging down the field and before I have even got over to the barn they are all queuing up for their tea.  And as soon as the horses see the alpacas come down, they too are calling for their tea!!

Here are some of the girls already down in the barn.  Come on Mum, where's our tea?? 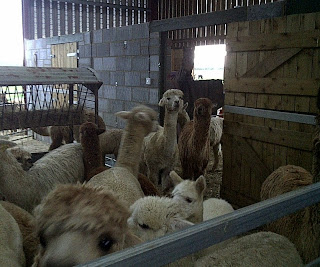 But they all seem to be very happy and well, if they are a bit dirty!!

Well hopefully if wont be as long until our next update!!

Bye for now.
Posted by Cotswold Vale Alpacas at 20:08 5 comments: