This is a first for me and I am finding it really difficult!  We have been lucky not to have lost a new born cria up until now!  Our poor mum whose lost her baby this morning seems very confused.

Initially this morning she didn't seem too upset, when let out of the stable she went out to graze coming back every now and then to the stable to check where her baby was, but tonight she is definitely distressed and confused.

Every time she see me she comes running and humming to me, as if she thinks I still have her baby, she then runs over to last years weanling's paddock searching to see if he is there,  then back up the field and along the fence line.

I have opened up the top field which has some lovely long grass in, thinking this may take her mind off it, she went off with the herd for a bit but was soon charging back down the field to the barn! and back over to the weanling's.

I do hope this doesn't go on for too long, its heart breaking to see, when she looks at me with her big brown questioning eyes, softly humming to me.  The sad thing is I am also hoping we do not have any births in the next couple of days, especially no white ones, as this was the colour of her cria.

Sadly our little cria passed away early this morning.  He was a true little fighter but mother nature decided it was not to be.  Its hard to accept that what appeared to be a lovely, large perfect looking cria could not be healthy and survive!  But the vet said it was just one of those freak acts of mother nature and there was nothing that could prevent it. Something that should automatically and naturally happen on birth didn't and there was nothing we could do about it.

I think mum had already sensed it was not to be and had started to stand away from him, we have left him in the stable with the door open, and after several trips back and forth she has now made her way back out into the field to join the rest of the herd.

Its such a sad waste of a life and a year, but hard as it is we must look forward to the rest of our births this year and hopefully a lovely new cria for her next year.

Farewell little man you touched our heart with your beauty and fighting spirit. RIP xx
Posted by Cotswold Vale Alpacas at 07:55 1 comment:

Where Has the Time Gone!!!!! Good and Bad times

Can't believe its over 3 months since my last blog, my apologies for such a long gap!

Lots and lots has happened, and I just don't know where the time has gone to!!  So this is going to a bit of a catch up blog.

The two cria from my last blog have grow very fast in to gorgeous alpacas, very pleased with both their fleece and colour. 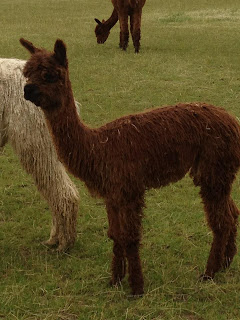 Here is one of them, couldn't get the other one to stay still long enough to get a photo of her!

Happy News - We have another little girl born last week (three weeks later than normal for this girl)  but has arrived safe and sound with the longest legs I have seen for a little girl!  Classic birth, but she did take a while to sit up, after over 30 mins she was still lying flat, she was cold, so I carried her into the barn and mum faithfully followed after me.  I was getting ready to put her under the heat lamp when someone arrived at the gate!  I went out to see what they want, was gone about 5 minutes, on the return to the barn she was up on her feet and trying to feed!!  Never seen such a quick recovery.  She is a gorgeous little and a lovely colour (one of my favorite colour's, but still amazes me you just don't know what you are going to get, mum and dad are light fawn and last year cria was white!!  But who cares she healthy that's all that matters) 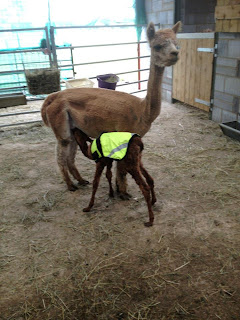 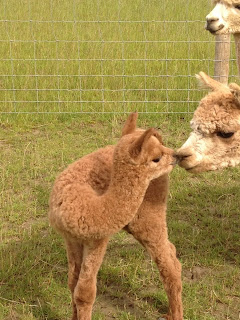 It was a very quick birth, a nice white boy weighing in at 9kg.  Because of the timing, weather etc we bought them into the barn, he seemed very lively and up quite quickly, he had 3 feeds before I went to bed, but this morning he was sat on his side with his leg stretched out to one side, his head was up and he was alert.  So I let them out into the coral, he followed his mum, all be it a bit wobbly, as it was quite nice I decided to let them out into the field, to get some sunshine and hopefully strengthen up his legs.  He followed his mum up the field to join the rest of the herd, as always that time of the morning they were all sitting down in the top corner, some spotted and come to say hello,  he then sat down but he hadn't fed.

He sat for about an hour at which time the girls all started to get up and graze, but he didn't get up, I went up to check on him again he was sitting on his side, I got him up and he wandered towards mum but didn't feed, then promptly sat down right in a puddle and got soaked!  I carried him back to the stable to dry him off.  He still wasn't feeding so I decided to try him with a bottle, which he happily took while sitting down (he had already had plasma just in case) around his eyes and nose was dark pink but not red.

I checked him an hour later, but he was still sat on his side where I had left him, his temperature was 37.7 so ok, but the membrane around his eyes, nose and under his tail and tummy was a lot redder!

I phoned the vet and it was decided it would be a good idea to take in him for a check up just in case there was any infection going on.  He sat in the back of the car and didn't move on they way there, but by time the vet came out to check on him he was kicking his legs about and shaking his head.

The vet checked him and said he thought he had a Portosystemic shunt in his liver, meaning the flap in the blood vessel taking blood through the liver had not done what it should have, and his blood was not going through the liver and being cleansed, so his body was not clearing the toxins out.

Option were operation, which he may or may not survive, plus would cost thousands of pounds, put him to sleep or nurse him through the next 24 hours to see if the shunt would move.

Well I didn't think an operation would be suitable both for the risk and the costs (sadly we don't have that sort of money!)  I wanted to give him a chance, so he has been sedated, we are feeding by tube and keeping everything crossed for him, tomorrow we will know one way or the other.

I hope and pray he pulls through, it will be such a sad waste of a life of such a gorgeous little cria who seems a real fighter!

It is such a roller coaster of emotions when breeding these gorgeous creatures and sometimes I wonder why I put myself through it!