After the sad loss of Zeus our little suri boy and our little dog, midgey's emergency operation the last few weeks have been a lot quieter with very little out of the norm happening.

When we decided to go into breeding alpacas we decided to have both Huacaya and Suri Alpacas, and have been so pleased we did, many people are instantly attracted to Huacaya's due to their big soft fluffy appearance.  But I have got to say the Suri's have definitely grown on me, they have a lot of character and its a wonderful sight to see a Suri in full fleece, especially when they run down the field and you see their beautiful fleece shimmer and sway in the movement like a silk curtain swaying in the wind, you have got to see it to appreciate it.  And I have enjoyed spinning their fleece, it gives a fine, soft, silky yarn once spun up.

Now with our thoughts turning to spring, looking forward to the coming birthing season and the first matings of our yearlings, I must now decide on what direction of our Suri breeding programme must now take!!

It was not just the sadness of loosing Zeus we had to deal with but the loss of a possible future Stud with a new breeding line and gene pool!  He was the result of the only outside mating we had done in 2010 and we were so pleased when he arrived, he was a lovely little man with a good Suri (Homozygous) phenotype conformation and it looked like he was developing a very pleasing fleece with lustrous fineness and  a good growth of independently locked ringlet staples.

Our original Suri girls came from Moonsbrook Alpacas, who are based in West Sussex, the two girls we had purchased were already pregnant and after having their cria were sent back to Moonsbrook to be re-mated, they spent several months away, which I found very difficult and it was about a four hour journey away, so an eight hour round trip!!

So the following year I decided it was too much for the girls, their cria and myself to do the journey again to be re-mated, so we arranged to have a male on loan from Moonsbrook at home with us, this was far easier on us all and we were pleased with the stud "Cambridge Efron" who sire is the Champion "Accoyo Bulleyman".

Here is Efron in his 2nd year fleece, I don't have the best of cameras and its not easy to see the detail of his fleece's tight locke in a photo he has to be seen in person to appreciate his lovely fleece, with the same standard of  locke not only on his saddle, but also carrying on down his neck, his legs and his forelock. 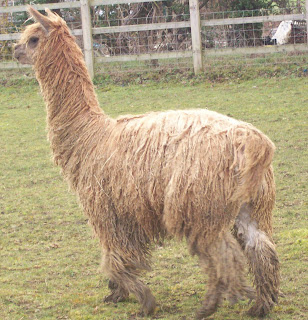 We had not considered purchasing a Suri stud, but when we were offered the chance to purchase Efron we thought it was a good idea, but like all breeders there comes a time when you have animals you will not be able to cover with particular studs due to being related!!
But we now have to make a decision!!
Efron has done a good job and we have been extremely pleased with the cria he has produced. Here are a couple of them.

Here is Maisey as a yearling, again with a good length growth and lustrous independent ringlet lockes, (again the photo does not catch the details of the locke and lustre) 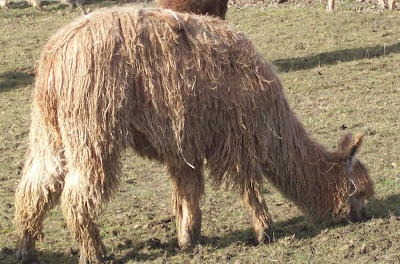 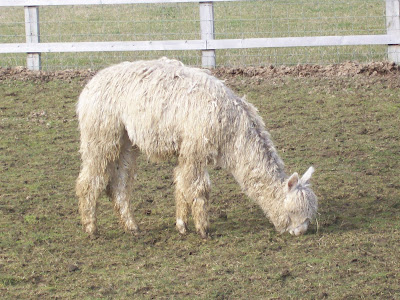 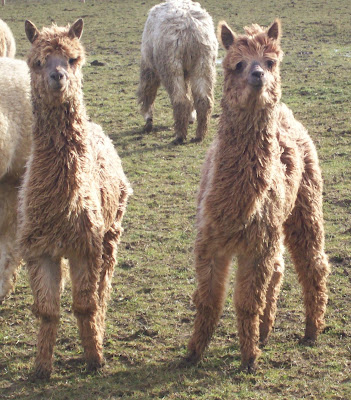 But we are now coming to the stage where we will have more females we CAN'T!! mate with him than those we can!!  We were hoping that our little Zeus may have filled the gap next year, and was considering getting a couple of outside matings this year for the girls we can't mate with Efron (his daughters), but there seems to be a shortage of available stud males in our area!!  I don't really want to travel too far again, especially if they don't fall pregnant first time!

So what to do??  I have been so pleased with what Efron has produced, but do I sell him and get a new stud with a completely new blood line??  Very hard when we know what he has produced, but no good if we can't use him on all our Suri girls!!  I suppose this is a problem many breeders come across, at present we really don't have enough spare capital to invest in another stud male, so what to do??  Its a shame there isn't an exchange stud service.

Well we have a couple of months to decide before we need to get our young girls mated so we will have to give this matter some hard thinking about!!

Well that's it for now, the sun is shining outside and there are jobs I need to get on with, not least a check spit off to see how many girls are still pregnant after the winter and how many cria we can look forward to this year.
Posted by Cotswold Vale Alpacas at 11:28 1 comment:

Well the last week has been a lot quieter and a lot less stressful than the previous weeks, Midgey is doing really well,  she had her stitches out yesterday and all seems to be healing as it should be and I think she is enjoying being centre of attention, Although Tinky our cat is not too impressed she is invading her space!

All the alpacas are doing well, but it will be weaning time in a few weeks!  Not a time I enjoy, but I don't know if we worry about it more than the alpacas do?  And not sure if its better they can't see each other or not?

The Bg's are still naughty as ever, I have just had to get one of them out from inside the fencing around one of the young trees in the field, somehow they had managed to crawling under the stock fencing!!  We get one out turn around and the other one is in there!!  So we now need to put a rail around the bottom to stop them!  otherwise we will not have a tree left!!  Little monkeys. 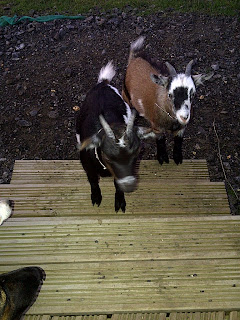 Well it freezing here today, can't stay out for long before your fingers and toes start to freeze up!  We are expecting snow tonight! just hope it doesn't stay for long and hope the spring hurries up and comes.